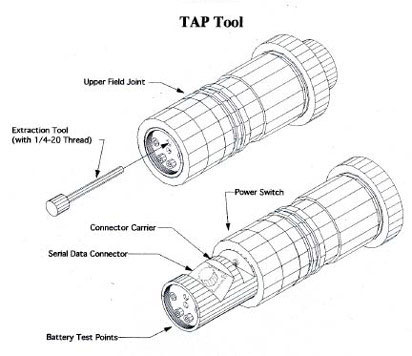 The TAP (High Resolution Temperature / Acceleration / Pressure) tool was designed at LDEO to acquire borehole temperature, tool acceleration and hydrostatic pressure data. It replaced the Lamont Temperature Tool (TLT) and was deployed during ODP and IODP from 1988 to 2005.

The TAP tool was fastened to the bottom of the triple combo; because it was a memory tool, the stored data were dumped to the third party DAS (Data Acquisition System) upon the tool’s return to the rig floor.

Fast and slow response thermistors were mounted near the bottom of the tool to detect borehole fluid temperatures at two different rates. The thinner, fast-response was able to detect small abrupt changes in temperature, while the thicker, slow-response thermistor was used to estimate temperature gradient and thermal regimes more accurately. One pressure transducer was included to turn the tool on and off at specified depths when used in memory mode. Typically, data acquisition was programmed to begin 100 m above the sea floor.

A 3-axis accelerometer was also included to measure tool movement downhole. These data were instrumental in analyzing the effects of heave on a deployed tool string, which was helpful for fine tuning the wireline heave compensator (WHC) .

Geothermics. The recording of temperature provides an insight into the thermal regime of the formation surrounding the borehole. The vertical heat flow is estimated from the vertical temperature gradient combined with the measurements of the thermal conductivity from logs or core samples.

Hydrogeology. Crust at mid-ocean ridge crests must be permeable to a considerable depth to allow for the efficient removal of heat by hydrothermal systems. Temperature logs in such an environment can clearly differentiate between the advective (hydrothermal) and conductive heat transfer regimes.

Drilling and circulation operations considerably disturb the temperature distribution inside the borehole, thus preventing equilibrated temperature conditions. The amount of time elapsed between the end of drilling fluid circulation and the beginning of logging operations is not long enough to allow the borehole to recover thermally. Therefore the data recorded were not necessarily representative of the thermal equilibrium of that environment. In addition, the thermistors might become fouled with sediment from the drilled formation, which reduces the sensitivity and accuracy of the recorded temperature data.

Temperature data acquired by the fast and slow thermistors could be presented with resistivity, density and porosity log data, or simply alone.