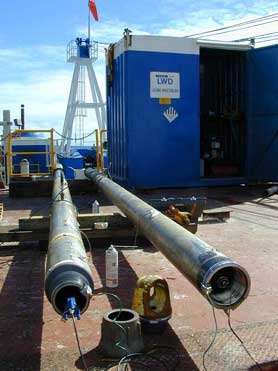 The LWD-CDR was an electromagnetic propagation and spectral gamma ray tool built into a drill collar. It had many similarities to dual induction tools: it responded to conductivity rather than to resistivity, operated in water- or oil-base muds, and provided two depths of investigation. It had better vertical resolution, but a shallower depth of investigation, than dual induction tools.

The LWD-CDR had upper and lower transmitters that fired alternately. The average of these phase shifts and attenuations for the upward and downward propagating waves provided a measurement with borehole compensation similar in principle to that of the Borehole-Compensated Sonic Tool (BHC). Borehole compensation reduces borehole effects in rugose holes, improves the vertical response, increases measurement accuracy and provides quality control for the log. An electrical hole diameter was computed from the CDR data and was used as an input to hole size corrections. 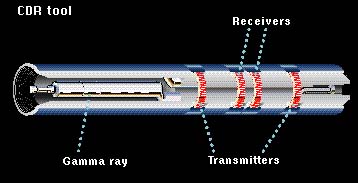 Detection of 3 in. (7.5 cm) beds was possible with the CDR tool. However, because of shoulder bed effects, Rps and Rad will read too low in a thin, resistive bed with conductive shoulder beds, and a small correction for bed thickness was required to obtain true  resistivity, Rt. A major advantage of the CDR tool was its ability to measure Rt in thin beds before invasion occurs. Once thin beds are deeply invaded, there is no reliable method for obtaining true resistivity.

The LWD-CDR was deployed during the Ocean Drilling Program from 1994—2000. It has been superceded by the LWD-arcVISION.

Porosity. In sediments that do not contain clay or other conductive minerals, the relationship between resistivity and porosity has been quantified by Archie’s Law. Archie’s Law relates the resistivity to the inverse power of porosity. This relationship has also been used to estimate apparent porosity in oceanic basalts.

Density and velocity reconstruction. Archie’s equation has been used effectively to create “pseudodensity” and/or “pseudovelocity” logs from porosity over intervals where no such logs were recorded or were totally unreliable. In some instances velocities derived from resistivity logs can be used to depth-tie seismic reflectors.

Lithologic boundary definition and textural changes. Resistivity, along with acoustic and velocity logs, is a very valuable tool  in defining lithologic boundaries over intervals of poor core recovery. In a particular example, the decrease in resistivity towards the top of a carbonate unit, coupled with a decrease in velocity, allowed one to interpret this unit as a fining-upward sequence in mostly carbonatic sediments. Similar saw-toothpatterns in the resistivity response can also be observed in oceanic basalt units where they are related to porosity changes towards the top of each unit.

Mineralogy. Carbonates usually display a low gamma ray signature;an increase of potassium can be related to an algal origin or to the presence of glauconite, while the presence of uranium is often associated with organic matter.

Attenuation Resistivity (ATR) and Phase Shift Resistivity(PSR) were usually plotted in ohm-m on a logarithmic scale along with gamma ray (GR) log in API units.

A full display of the Natural Gamma Spectroscopy data with SGR(total gamma ray in cps), CGR (computed gamma ray — SGR minus Uranium component — in cps), and THOR (in ppm), URAN (in ppm),and POTA (in wet wt%) was usually provided separately. 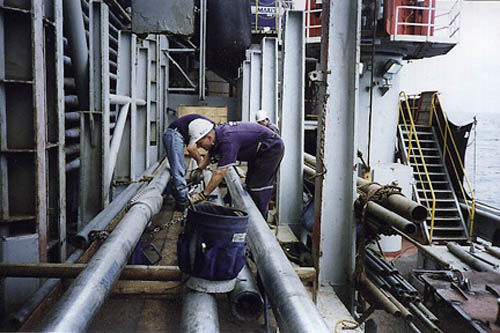