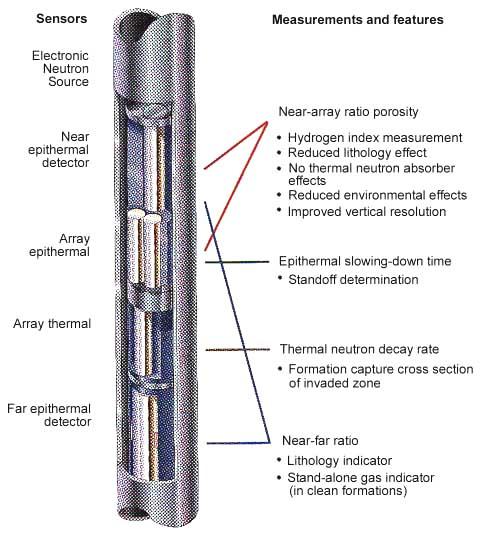 Porosity. In reservoir engineering the importance of porosity measurements is quite evident. In the study of the volcanic rocks that make up the upper oceanic crust, a good in-situ porosity measurement is critical to the correct understanding of the crustal structure, for two reasons: first, because it samples both the small-scale (microcrack, vesicle) porosity seen in the cores and the large-scale fractures not sampled by drilling; and second, because other properties such as density, seismic velocity, and permeability depend strictly on porosity variations and on the geometry of the pore space. In the presence of clays or hydrous alteration minerals a correction is required to account for the presence of bound water.

Lithology. Because the hydrogen measured by the tool is present not only as free water but also as bound water in clay minerals, the porosity curve, often combined with the density log, can be used to detect shaly intervals, or minerals such as gypsum, which has a high hydrogen index due to its water of crystallization. Conversely, the neutron curve can be used to identify anhydrite and salt layers (which are both characterized by low neutron readings and by high and low bulk density readings respectively).

Hole size also affects the neutron log response; the formation signal, particularly for the epithermal count rates, tends to be masked by the borehole signal with increasing hole size.

In liquid-filled holes the influence of the borehole fluid depends on its salinity — chlorine is a strong neutron absorber — and density: the addition of weighting additives such as barite will yield a lower porosity reading. When the neutron tool is run through the drilling pipe and bottom hole assembly, the recordings should be used with caution. Because iron is a strong neutron absorber, an increased porosity reading will result, its degree depending on the thickness of the pipe.

The APS is typically run with the HRLA/DIT, HLDS, and HNGS tools.