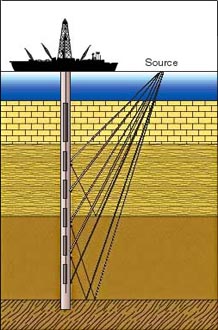 The Array Seismic Imager (ASI) consisted of an array of five seismic shuttles linked by a bridle to a signal-conditioning cartridge. Each shuttle sensor package contained three mutually orthogonal geophones fixed relative to the sensor package geometry. One geophone lay along the axis of the package (z-axis); the other two geophones (x- and y-axes) formed a 45° angle relative to the clamping direction. This design allowed the ASI tool to operate in wells with a 90°deviation while not exceeding the 45° limitation of the X and Y geophones. For the study of anisotropy and analysis of split shear, these features made the ASI tool reliable in both vertical and deviated wells, with consistent X and Y component response.

The ASI tool was unique in that it ensured consistent, lengthy coupling periods during downhole seismic acquisition, both in vertical and deviated wells. This feature made the ASI tool ideal for 2D and 3D time-lapse borehole seismic surveys, reservoir monitoring applications and amplitude variation with offset (AVO) calibration walkaways.

The ASI was deployed during ODP Leg 156 (North Barbados Ridge).

The ASI acquired three-dimension walkaway vertical seismic profile (VSP) surveys in both vertical and deviated wells. One of the primary benefits was its low deployment time, since multiple geophones were deployed simultaneously.

The ASI tool could be used in cased holes without employing special equipment. Adding a bowspring assembly, however, allowed surveying of open holes from 8 1/2 to 13 in (21.5 to 33 cm).