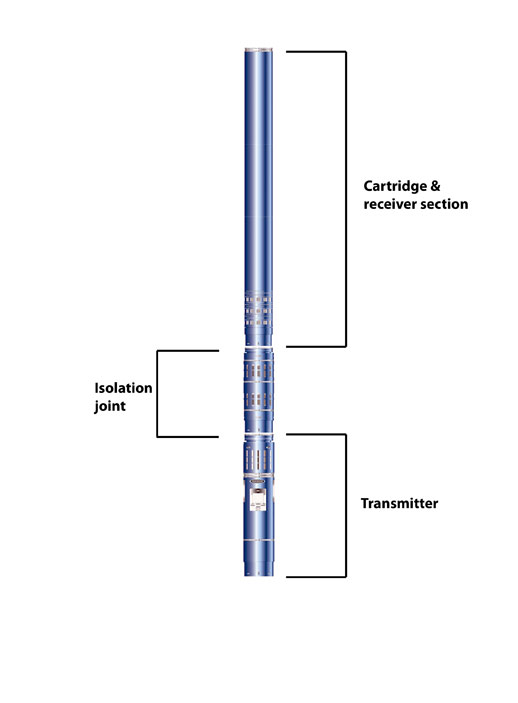 borehole compressional, shear and Stoneley slownesses (slowness is the reciprocal of velocity and corresponds to the interval transit time measured by standard sonic tools).

The receiver section contains eight receiver stations spaced 6 in. apart and spanning 3.5 ft. Each station contains two hydrophone pairs: one oriented in line with the upper dipole transmitter and the other in line with the lower dipole transmitter. The outputs from each pair are differenced for dipole reception and summed for monopole reception. Receivers are carefully matched during manufacture and the receiver array provides more spatial samples of the propagating wavefield for full waveform analysis. The arrangement of the transmitters and receivers allows measurement of wave components propagating deeper into the formation.

The acquisition cartridge contains the circuitry to perform automatic gain control, digitize eight separate waveforms simultaneously, stack these waveforms from more than one firing and then transmit the signals uphole. Threshold detectors for recording amplitude threshold crossing times for each waveform are also present. These are for compressional first-motion detection and allow derivation of compressional slowness in a manner similar to the analog threshold detection scheme used in conventional sonic tools.

Dipole technology allows borehole shear measurements to be made in “soft” rock as well as “hard” rock formations. Limited by borehole physics, monopole tools can detect only shear velocities that are faster than the borehole fluid velocity — or in hard rocks only. Dipole tools overcome this fluid velocity barrier.

The DSI tool has several data acquisition operating modes, any of which may be combined to acquire digitized waveforms over each 6-in. logging interval. For waveforms, eight channels are digitized simultaneously with a 12-bit dynamic range.

Upper and lower dipole modes
Eight dipole waveforms from firings of either of the dipole transmitters — sampling every 40 microsec, 512 samples/waveform.

Stoneley mode
Eight monopole waveforms from firings of the monopole transmitter driven with a low-frequency pulse — sampling every 40 microsec, 512 samples/waveform.

In addition to the new dipole features, acquisition of the Stoneley wave velocity utilizes a low-frequency monopole energy pulse for highest-quality Stoneley measurements. Stoneley-derived permeability is useful for evaluating fractures as well as investigating deeply into the formation.

A new technique for detecting compressional wave arrival–digital first-motion detection (DFMD)–provides measurements that are compatible with previous sonic logs, in addition to a 6-in (15 cm) vertical resolution compressional sonic.

Processing with the MAXIS wellsite unit displays a full wave and its component characteristics. Its high-speed array processor uses the slowness-time-coherence (STC) method to determine compressional, shear and Stoneley slowness values. A choice of band-pass filters permits utilization of the optimum frequency range within a mode. The process reliably provides unambiguous transit times even in difficult borehole conditions. The resulting values are useful inputs for mechanical properties, formation evaluation and seismic applications.

Details on acoustic wave propagation can be found here.

Depths of investigation for sonic devices depend on the formation type, shear and compressional slowness, the transmitter-to-receiver spacing, wavelength of the wave considered and whether it is a head wave or a guided wave, the source frequency and signal types.

Frequency determines the wavelength that drives the depth of investigation of the measurement.

Typical sonic wavelengths at different frequencies and slownesses are shown in the “Additional Specifications” table. Low frequency penetrates deeper into the formation and helps read beyond altered zones.

Numerical simulations verified by measurements from scale models show that when eccentering is small compared to the borehole radius, there is little change in the character of the dipole waveforms or in the STC-processed slowness values. Large eccentering, on the order of 2 to 4 in (5-10 cm) in a 12-in (31 cm) borehole, increases the flexural wave amplitude relative to the compressional. For the DSI-2 tool, the variation in the shear slowness estimate is ± 2 percent over the normal slowness range.

Slowness or velocities can be plotted alongside resistivity, density, or image data.