The Dual Laterolog (DLL) provided two resistivity measurements with different depths of investigation into the formation: deep (LLd) and shallow (LLs). In both devices, a current beam 2 ft-thick (A0) was forced horizontally into the formation by using focusing (also called bucking) currents (A1– A2, A’1-A’2); monitoring electrodes (M1, M2, M’1, M’2) were part of a loop that adjusted the focusing currents so that no current flowed in the borehole between the two electrodes. For the deep measurement both measure and focusing currents returned to a remote electrode on the surface; thus, the depth of investigation was greatly improved and the effect of borehole conductivity and of adjacent formations was red 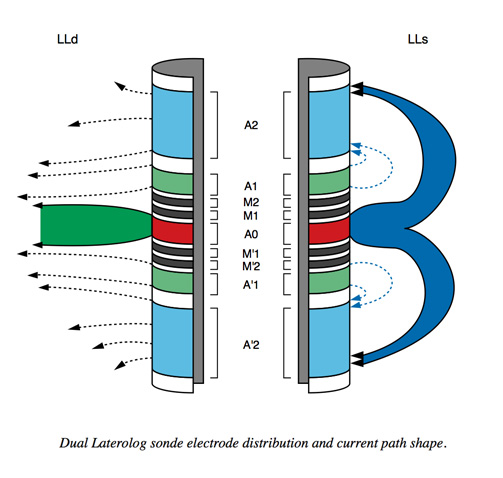 uced. In the shallow laterolog, the return electrodes that measured the bucking currents were located on the sonde and the current sheet thus retained focus over a shorter distance than the deep laterolog.

The Dual Laterolog had a response range of 0.2 to 40,000 ohm-m, whereas the Phasor Dual Induction Tool (DIT) had a range of 0.2 to 2,000 ohm-m. The DLL was useful for igneous environments (e.g., oceanic basalts and gabbros) because the resistivities can be higher than the upper limit of what the DIT can measure. However, in upper crustal environments (seismic Layers 2A and 2B), the resistivities are usually low enough that the DIT can be used. This was the case in data from, for
example, ODP Legs 104 and 152 as well as Hole 395A.

Porosity. Because of the inverse relationship between resistivity and porosity, the dual laterolog could be used to compute the porosity of the rock from Archie’s equation if the sediments/rocks do not contain any clay or if the contribution of surface conduction to the signal is negligible.

Fracture porosity. This could be estimated from the separation between the deep and shallow measurements based on the observation that the former was sensitive to the presence of horizontal conductive features only, while the latter responded to both horizontal and vertical conductive structures.

For the LLD, the borehole effect was small for hole diameters up to 16 in, while the LLS provided good readings in holes not exceeding 12 in. Corrections were available for holes up to 20 in (25 cm) in diameter.

The LLD and LLS curves were usually displayed on a resistivity logarithmic scale, along with the gamma ray log.

The DLL was usually run in combination with a Gamma Ray Tool (GR, SGT, NGT, HNGS).