The Formation MicroScanner sonde (FMS) consists of four orthogonal imaging pads each containing 16 microelectrodes which are in direct contact with the borehole wall during the recording. The button current intensity is sampled every 0.1 in (2.5 mm). The tool works by emitting a focused current from the four pads into the formation. The current intensity variations are measured by the array of buttons on each of the pads.

Processing transforms the current intensity measurements, which reflect the microresistivity variations of the formation, into high resolution gray or color images of variable intensity. Black and white (darkest or lightest color) indicate low and high microresistivity, respectively. The tool also includes a General Purpose Inclinometry Cartridge (GPIT) which provides accelerometer and magnetometer data in order to allow one to define the tool position and spatial orientation of the data.

In smooth boreholes with very homogeneous bedding the depth of investigation is about 10 in (25 cm). The vertical resolution is 0.2 in (5 mm).

FMS images can be plotted with identical vertical and horizontal scales to see features without exaggeration. However, due to physical constraints, different vertical and horizontal scales are commonly used. The images are displayed on an oriented plot, also called an azimuthal plot, because the images are positioned according to their orientation in the borehole with N in the center and S on both edges. Images from two passes of the tool can be merged and plotted together. The calipers or other curves can be plotted alongside the images as well. 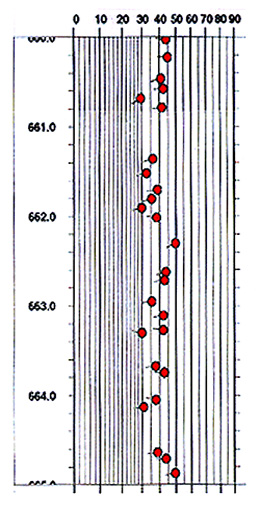 Turbidite sequences are imaged here by the FMS data. Red sine waves on the images trace bedding planes.The corresponding “tadpole” plot shows the average dip is roughly 40 degrees to the west. Interpretive work of the FMS data can be performed either on the ship or onshore with the GeoFrame software.