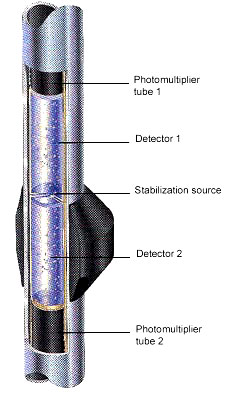 The Hostile Environment Natural Gamma Ray Sonde (HNGS) utilizes two bithmus-germanate (BGO) scintillation detectors to measure the natural gamma ray radiation of the formation. The larger detector volume and higher gamma ray stopping power of BGO makes the HNGS a very effective spectral gamma tool. The HNGS makes similar measurements to the NGT; however, the HNGS is more accurate and capable of making measurements in difficult hole conditions. The HNGS employs a larger and better scintillation detector than the NGT which affords better nuclear decay statistics. The HNGS measures total gamma and 256-window spectroscopy to resolve the detected spectrum into the three most common components of naturally occurring radiation: potassium, thorium, and uranium. The high-energy part of the spectrum is divided into three energy windows, each covering a characteristic peak of the three radioactivity series. The concentration of each component is determined from the count rates in each window. Because the high-energy region contains only 10% of the total spectrum count rates, the measurements are subject to large statistical variations, even using a low logging speed. The results are considerably improved by including the contribution from the low-energy part of the spectrum. Filtering techniques are used to further reduce the statistical noise by comparing and averaging counts at a certain depth with counts sampled just before and after. The final outputs are the total gamma ray, a uranium-free gamma ray measurement, and the concentrations of potassium, thorium, and uranium.

The radius of investigation depends on several factors: hole size, mud density, formation bulk density (denser formations display a slightly lower radioactivity) and the energy of the gamma rays (a higher energy gamma ray can reach the detector from deeper in the formation).

Only the high-energy gamma rays are used in the analysis, thereby eliminating sensitivity to mud barite content. The MAXIS acquisition system provides real-time corrections for borehole size and the borehole potassium contribution.

Mineralogy. Carbonates usually display a low gamma ray signature; an increase of potassium can be related to an algal origin or to the presence of glauconite, while the presence of uranium is often associated with organic matter.

The HNGS response is affected by borehole size, mud weight, and by the presence of bentonite or KCl in the mud. KCl is sometimes added to the mud to stabilize freshwater clays which tend to swell and form bridges. This procedure takes place before logging operations start, and even though KCl is probably diluted by the time the tool reaches total depth, it can still affect the tool response.

The HNGS log is usually recorded with each logging string for correlation between logging runs. To this purpose HSGR (total gamma ray in API units) and HCGR (computed gamma ray — HSGR minus Uranium component, in API units) are usually displayed along with other curves (resistivity, sonic, density, etc.). A full display of the data with HSGR, HCGR, and HTHO (in ppm), HURA (in ppm), and HFK (dec fraction) is usually provided separately.

The HNGS is typically run at the top of the tool string.