The Schlumberger QSST was a single-axis seismic checkshot tool that ran in-line with the triple combo tool string. The QSST consisted of a single hydrophone and did not utilize a clamping arm like the WST to force it into contact with the borehole wall. Seismic coupling was achieved by setting the tool on the bottom of the hole and allowing it to lean against the borehole wall, coupling passively to the formation.

The QSST then recorded the vertically incident signals at the bottom of the hole that were generated by a seismic source on the JOIDES Resolution (e.g., GI guns) positioned just below the sea surface.The recorded signals enabled a one-way travel-time to be determined from the surface to total depth, providing a check of travel-time vs. depth for calibration of seismic profiles and correction of synthetic seismograms. Off-bottom stations were not possible using the QSST. The rig time required to run this single-point checkshot survey was negligible since the QSST could be combined with other tools.

The QSST was run at four holes during ODP Leg 204. 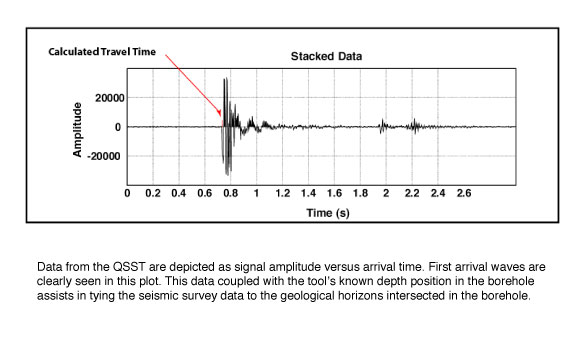