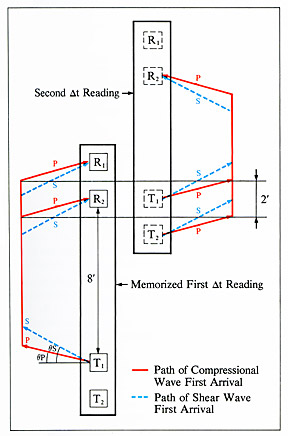 Long Spacing Sonic Sonde (LSS*) contained two acoustic sources spaced two feet apart located eight feet below a pair of receivers also spaced two feet apart. This provided source-receiver offsets of 8, 10, 10, and 12 feet. The measurement relied on the “depth-derived” borehole compensation principle. Compensation was achieved by memorizing the first Δt reading and combining it with a second Δt reading measured after the sonde had been pulled the appropriate distance along the borehole. The symmetry of the sources and receivers allowed travel-time measurements for 8 combinations of sources and receivers. Four of these were reversed by source-receiver reciprocity.

Sonic waveform analysis. If a refracted shear arrival is present, its velocity can be computed from the full waveforms, and the frequency content and energy of both compressional and shear arrivals can also be determined.

One common problem is cycle skipping: a low signal level, such as that occurring in large holes and soft formations, can cause the far detectors to trigger on the second or later arrivals, causing the recorded Δt to be too high. This problem can also be related to the presence of fractures.

Transit time stretching appears when the detection at the further detector occurs later because of a weak signal. Finally, noise peaks are caused by triggering of detectors by mechanically induced noise, which causes the Δt to be too low.

Delay times (µsec/ft) were usually displayed along with gamma ray and resistivity data.

The LSS was run alone or in combination with resistivity and gamma ray tools.