The WST was a Schlumberger single axis check shot tool used for zero offset vertical seismic profiles (VSP). The WST consisted of a single geophone, pressed against the borehole wall,

that was used to record the acoustic waves generated by an air gun located near the sea surface. A 120 in³ air gun was suspended by buoys at a depth of 3 meters below sea level, offset 48.5 m from the hole on the portside. The WST was clamped against the borehole wall at intervals of approximately 50 m, and the air gun was fired five to seven times. The resulting waveforms were stacked and a travel time was determined from the median of the first breaks in each trace. These check shot experiments attempted to reproduce the seismic reflection profiling by simulating a similar geometry and source frequency. In general, the acoustic velocities and resulting depth-travel time pairs determined from the sonic tool differ significantly from the seismic velocities because of frequency dispersion (e.g., the sonic tool works at 10-20 kHz vs. 50-100 Hz in seismic tools) and because the sound is forced to travel along the borehole wall, a path that is quite different from the one taken by the air gun signal generated during a seismic reflection survey. In addition, sonic logs are not obtained above the bottom hole assembly, and the travel time to the uppermost logging point has to be estimated by some other means.

Depth-traveltime pairs determined from check shots can be used to produce a depth-travel time plot and to calibrate the sonic logs and determine accurate drilling depths and their relative position with respect to targets on the seismic reflection profiles.

The first arrival times are plotted against depth (the time vs. depth data derived from core and log sonic velocity measurements can be displayed on the same plot). The interval velocities (gradients of the time vs. depth plot between WST stations) can be plotted in the same track as the sonic velocity log. Velocities are given in m/sec; arrival times are measured in either milliseconds or seconds.

If the WST waveforms have been processed as a zero-offset VSP by the Schlumberger engineer on the ship, the resulting seismogram can be plotted vs. two-way-time alongside the seismic section and the synthetic seismogram. 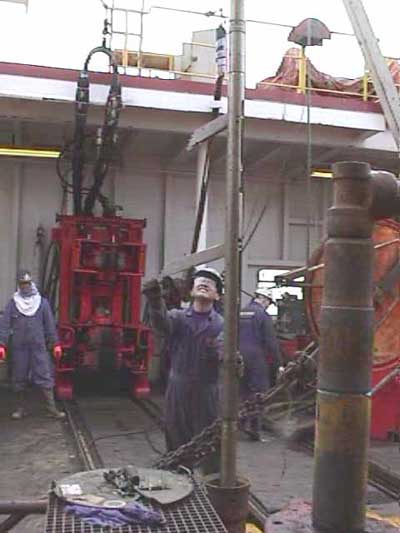 The WST was run alone and placed at stations at regular intervals. At each station a seismic shot was produced at the sea surface using either air or water guns provided by IODP-USIO Science Services,TAMU. Schlumberger provided a blast hydrophone for synchronizing the gun pulse with the system timer.

The WST and other downhole seismic tools are sensitive to pipe noise and ringing of pipe following a shot. Efforts were made to reduce pipe noise at each station. If time and resources permitted, a drill string packer was deployed to dampen the banging motion of the pipe against the borehole.

The CSES was not used with the WST for three primary reasons: