The Borehole Televiewer (BHTV) was an acoustic device that scanned the wall of a borehole, producing an image of the reflectivity of the rock surrounding the wellbore as function of depth and azimuth. The BHTV was manufactured by SIMPLEC under license from Mobil Oil Corporation. 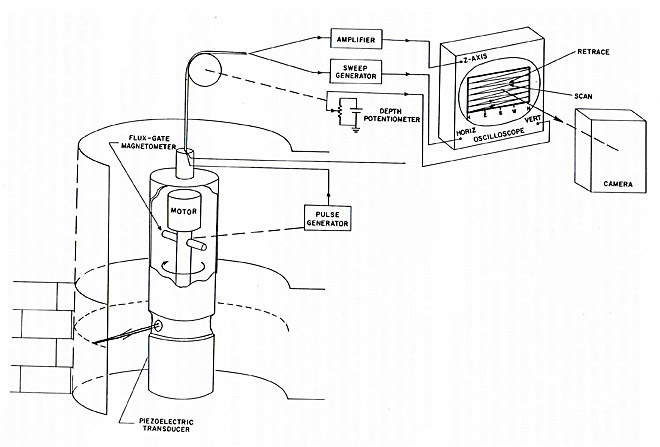 The BHTV log was obtained while logging uphole at a rate of approximately 1.5 meters/minute with the sonde centered in the hole by means of bowspring centralizers. A piezoelectric transducer mounted on a central shaft rotated 3 times per second and transmitted a high-frequency acoustic pulse 600 times per revolution. Two transducers mounted on this shaft allowed the operator to select either a 1.3 MHz or 400 kHz source pulse. While the higher frequency source revealed more of the details of the wall surface, the lower frequency source had better penetration and could produce a cleaner image in borehole with rough walls. When the source pulse was transmitted, it traveled through the borehole fluid, reflected from the borehole wall and returned to be received at the transducer. This returning signal was transmitted uphole and recorded on a specially-formatted video cassette recorder while its amplitude was simultaneously displayed as brightness on a the z-axis of an oscilloscope. The oscilloscope image was thus an acoustic picture of the reflectivity of the borehole wall, where the azimuth and depth varied along the horizontal and vertical axis, respectively. A film of the oscilloscope screen was exposed, which was aligned (along the left-hand edge) with the magnetic north using a sweep generator triggered by a downhole fluxgate magnetometer. This film exposure could be adjusted to compensate for reflectivity (amplitude) variations due to changes in hole size or opacity of the borehole fluid, such as from suspended cuttings, to show the fine-scale detail of the interior of the borehole wall.

Location and orientation of fractures intersecting the borehole. Structural features such as bedding in sediments, as well as the character and distribution of pillow basalts in the ocean crust, can be determined from oriented amplitude images of the borehole wall.

Measurement of borehole diameter. Wall surface roughness and ellipticity, the characteristics of borehole breakouts, and the orientation of the principal horizontal stress from cross-sectional images of the borehole dimensions are measured.

In addition to obtaining a film image of the borehole reflectiivity, the signal recorded on video cassette could be digitized by a MASSCOMP computer and processed in a variety of way to enhance the image and improve the results. These digital televiewer logs could be analyzed quantitatively, where previous analyses of BHTV images were at best only qualitative. For example, the BHTV data could be processed to obtain a picture in which the image intensity was proportional to the travel-time of the reflected pulse. Such travel-time information could also be processed to create a three-dimensional wire mesh image of the slope of the borehole. In addition, the borehole size could be presented as a function of depth and azimuth in the well, and from three different prespectives, which could be very useful for fracture identification and interpretion.