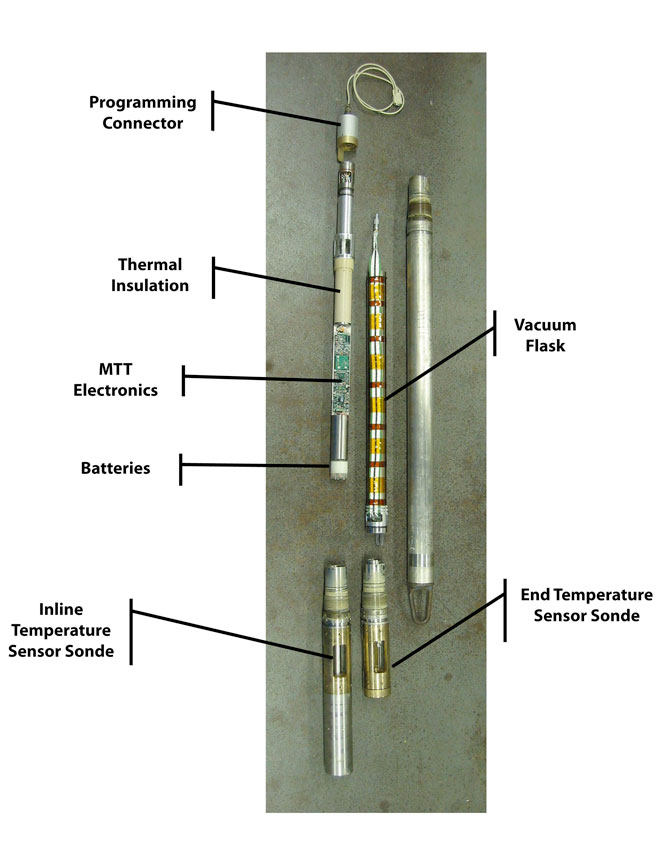 The Modular Temperature Tool (MTT) is a flexible, general-purpose third party temperature logging tool developed by the Lamont-Doherty Earth Observatory Borehole Research Group. It replaces two previous temperature logging tools: 1) the Temperature-Acceleration-Pressure probe (TAP), which was limited to temperatures below 85°C and operated only in memory mode; and 2) the High Temperature Tool (HTT), which could only be deployed in standalone mode and was difficult to use. The MTT is a high accuracy and fast responding instrument that resolves inch-scale temperature variations at typical 900 ft/hr logging speeds.

The MTT uses two temperature sensors: a fast responding thermocouple and a highly accurate RTD (Resistance Temperature Detector). It contains two sensor sondes; one is for use at the end of string (typically memory logging), and the other allows the MTT to operate in the middle of a tool string (typically sending data back via Schlumberger telemetry). The MTT can either store log data in flash memory for later recall or send real-time data to the surface via Schlumberger’s telemetry system. To cope with the high ambient temperature, all components except the temperature sensors are contained in a vacuum flask.

The MTT also includes an accelerometer channel to improve data stacking by precisely measuring logging speed and providing better depth corrections. A specialized telemetry system, the Schlumberger-Lamont Telemetry Adapter (SLTA), was developed specifically for the MTT in order to allow the tool to be combined with Schlumberger tools for single logging tool string deployment and to minimize the required rig time necessary to acquire the log.

Hydrogeology.  Helps identify sections of inflow or outflow as fluids move through the sediments and the oceanic crust.

Safety. Knowledge of fluid temperatures is needed in order to prevent damage to heat sensitive instruments.

The MTT response can be affected by borehole size and circulation of fluids during drilling operations. Down flow of colder and denser ocean bottom water after drilling into the borehole can affect the temperature profiles. 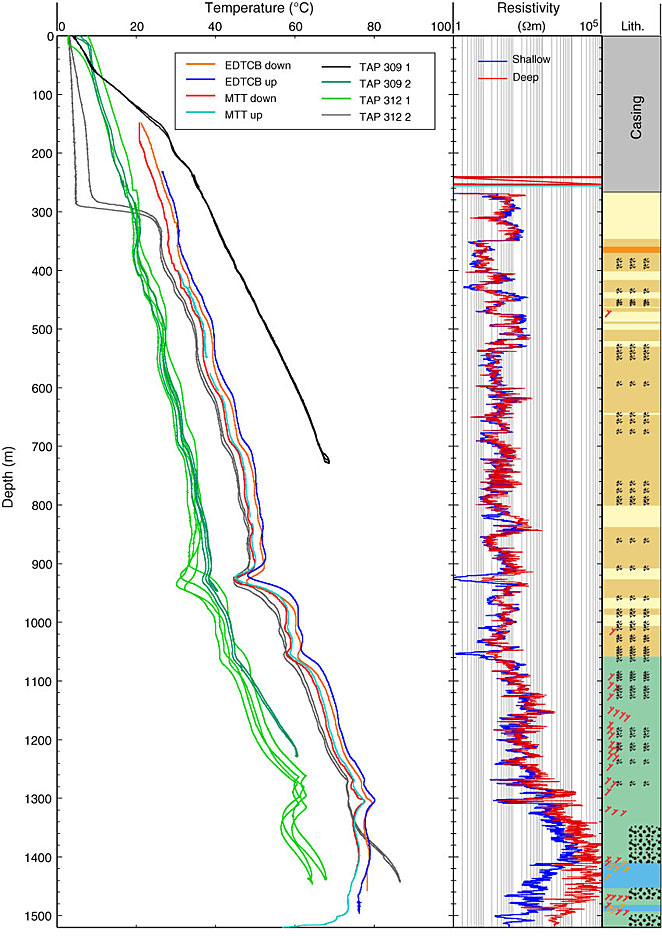 Downhole temperature profile from Hole 1256D showing data collected with the various temperature tools used throughout years of operations in Hole 1256D. The MTT data were collected during IODP Expedition 335 after approximately 5 weeks of drilling operations.