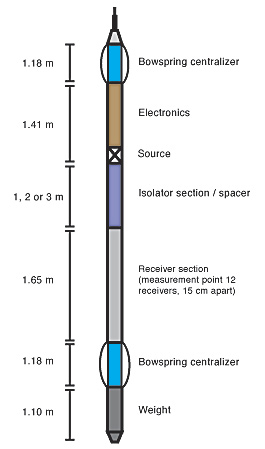 Although the standard Schlumberger sonic logs could provide accurate compressional velocities, the additional information from the multi-channel sonic log tool (MCS) enabled determination of the elastic properties of the formation and a qualitative estimate of fracture transmissivity.

The MCS was a multi-receiver, single-source sonic logging tool that recorded 12 sonic waveforms at each recorded depth. It was configured with a magnetostrictive source above the receiver section, from which it was separated by a variable-length spacer assembly. The receivers were spaced 15 cm apart, resulting in a 1.65-m receiver array, and formed a vertical geometry analogous to a surface refraction survey. The energy that ultimately arrived at the receiver array traveled from the source as a compressional pulse in the borehole fluid, refracted at the borehole wall, propagated through the wall rock, and refracted back into the borehole fluid. During logging, the MCS tool had to be centered in the borehole by means of bowspring centralizers to ensure simultaneous arrival of the signal around the tool. Additional guided modes were typically produced in the borehole environment, and their propagation was controlled largely by the coupling of energy between the formation and the fluid-filled borehole.

Lithology and Poisson’s ratio. These can be determined from compressional and shear wave velocities.

Porosity and pore aspect ratio. Both of these can be estimated from Vp and Vs and theoretical models.

Structural analysis and fracture location. These can be obtained by amplitude and frequency evaluation of MCS data.