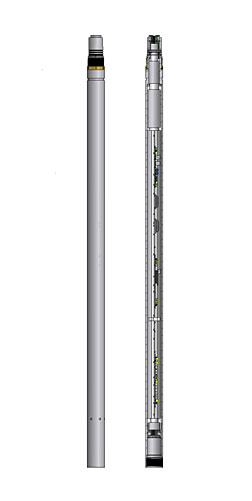 The Multifunction Telemetry Module (MFTM) is a wireline logging telemetry system that allows a string of LDEO wireline tools to operate in a Schlumberger (SLB) toolstring and acquire data in a single logging pass.

The MFTM system has a modular design and operates in three configurations:

In SLB mode, the MFTM system works in conjunction with the hardware and software developed during the MSS-SLB integration project. This was a joint project between LDEO and SLB to create an interoperability standard between LDEO tools and the SLB telemetry system. The MFTM communicates with LDEO tools beneath it using BRG’s own telemetry protocol, and sends data from the LDEO tools through the Enhanced tool bus Lamont Interface Cartridge (ELIC) uphole to the SLB surface panel, where it is displayed in real-time during acquisition and the SLB software writes the data to a log file. An MFTM postprocessor converts these log files to time- and depth-indexed data files for use by LDEO logging scientists.

In third party mode, the MFTM works in conjunction with the MFTM Telemetry Surface Control Panel (TSCP) to provide power and communication to third party tools beneath the MFTM at the end of the logging cable.