Because a separate logging run dedicated solely to heat flow measurement is not economically feasible, the Borehole Research Group at LDEO designed a self-contained tool that could be attached to the bottom of any of the Schlumberger strings or to the BRG specialty tools from BRG. Fast- and slow-response thermistors measured the temperature every 1 and 2-5 seconds respectively, while pressure was measured every 3.5 seconds by a transducer. The pressure transducer also turned on the tool when the recording depth (100m above the mudline) was reached, thus preventing battery drain. The fast-response thermistor (time constant = ~0.4s; precision = ±0.005°C) was able to detect small, abrupt temperature excursions in the borehole fluids caused by fluid flow from the formation and could be used to estimate temperature gradients in the formation. The slow-response thermistor also had a precision of ±0.005°C. Data were recorded as a function of time, with conversion to depth based on the synchronized time-depth record of the wireline cable.

The power supply came from two lithium batteries that powered the electronics cartridge and the pressure transducer.

Shortly after the logging operations, the data were downloaded from the tool memory to be processed. Data processing involved first extracting the data from a raw data file and then converting it into reasonable temperatures and pressure as a function of time. Further processing, such as converting hydraulic pressure into depth, or merging temperature vs. time with time vs. depth data from Schlumberger logs, was needed to produce temperature logs.

The TLT was deployed during the Ocean Drilling Program from 1988 to 1998, after which it was succeeded by the Lamont Temperature/Acceleration/Pressure TAP Tool. 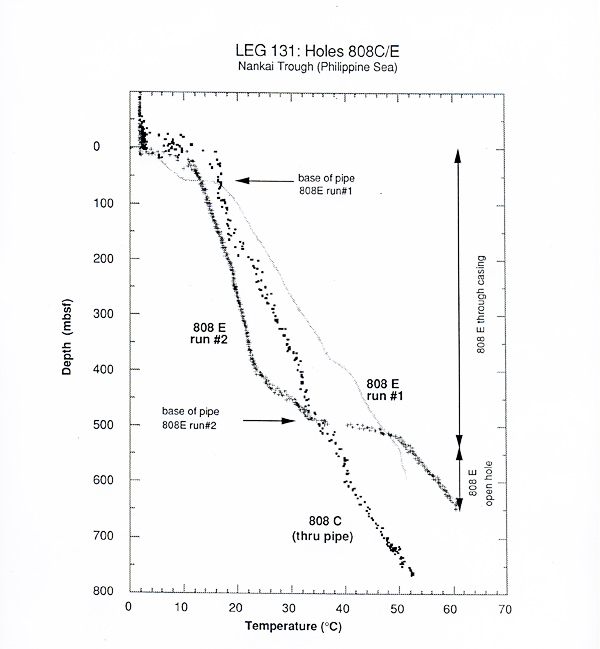 Temperature data versus depth at holes 808C/E during ODP Leg 131. The TLT was run through pipe at hole 808C and through casing and open hole at Hole 808E.